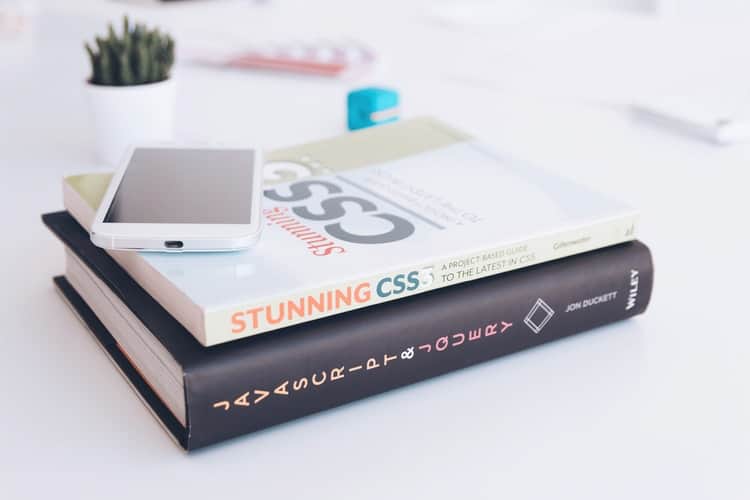 From online blogs, video games, and even your favorite shopping site, front end programming is a fact of life for all technology users, and the job market for front end developers is better than ever. Salaries are high and always increasing, so now is the time to jump into the industry. But before you dive in, it’s a good idea to learn about some of the more common front end programming languages.

In this article, we’ll go over the basics of front end web development and cover the most important front end coding languages that you’re sure to encounter on your journey to break into tech!

Front end programming is a lucrative field. Most front end programmers earn an average salary of $79,929 each year. Moreover, the position is expected to see a 13% growth by 2028, according to the Bureau of Labor Statistics. Senior front end developers, however, typically earn $103,344 each year.

Three common job titles that you might see for front end programming are:

UI/UX designers are front end developers who specialize in User Interface and User Experience. UI designers focus on the visual aspects of the website. This might include determining how elements like buttons, text, and images appear on a webpage. A UX designer, on the other hand, work to ensure that a website is user-friendly.

How to Become a Front End Developer

You’ll need to learn the coding languages detailed below. In addition to mastering these coding languages, you’ll also need to use the best practices of cybersecurity and be comfortable with pair programming. You’ll also need to be able to follow directions well, manage time, and take a leadership position when necessary. If you’re completely new to coding, you’ll most likely start out as a junior front end developer. However, after working your way through the ranks, you’ll soon find yourself working as a senior front end developer managing your own team.

It’s important to understand the scope of HTML. Without this coding language, web pages wouldn’t work the way that they do. In short, HTML code formats the text, images, and other media that make up a webpage. The language communicates with the computer using a series of attributes and elements. HTML has evolved greatly over time. The language now enables web pages to host videos, and sound. It’s important to note that HTML couldn’t make a very functional webpage by itself. The programming language relies heavily on CSS and JavaScript. To make it as simple as possible, think of HTML as the structure of a website while CSS is the style and JavaScript is the functionality. HTML is a highly important coding language that has continued to help shape the internet and web browsing as we know it. So, why not learn it?

CSS or Cascading Style Sheets goes hand in hand with HTML. CSS takes the text-based website that you’ve made and applies things like color, images, videos, and other media to it. CSS makes websites look more appealing to viewers.

JavaScript is all about functionality. JavaScript is one of the most popular languages in the coding universe right now. JavaScript is also a highly diverse language that can be used to code anything from video games to websites. It can also be used for both mobile and desktop apps. JavaScript was a required skill for over 470,000 jobs in tech last year. Potential jobs could include web development, front end development, or JavaScript engineering.

Four important soft skills that will help you land jobs in front end development are:

Websites and technology are constantly evolving, so you will need the creativity necessary to stay on top of these trends and adapt to them. Excellent teamwork and communication skills are also necessary for collaborating with other front end developers, as well as interacting with designers, project managers, and quality assurance engineers.

You’ll also need to be familiar with Git and Github. It’s important for front end web developers to stay up to date on the latest innovations in programming and front end technology. Don’t stop with just the tech side of things! Learning prominent design aspects such as color theory and typography can also pay off big time when it comes to the proficiency of your own personal portfolio. Having a sound basis of design can give you a step above the competition as your projects will professional and overall more pleasing to the eye.  Learning these skills will also prepare you for many other jobs within the tech industry should you ever feel the need to switch job roles.

What is a Coding Bootcamp?

If the prospect of working in the front end development sector interests you, you may be wondering where to begin. If you’re new to coding and want to get a well-rounded coding education, then coding bootcamps may be the best way to go.

“What is a coding bootcamp?” you ask? Coding bootcamps are intensive coding career training sessions that help you go from a novice to a career ready coder. Coding bootcamps last anywhere from 3 months to 2 years and can take place in person, online, or a hybrid of both. Many coding bootcamps have a combination of prep courses, projects, and portfolio building, pair programming, and career advisement. Most bootcamps run 5-6 days a week for 10-12 hours a day. From sun up to sun down you’ll be coding, attending classes, and completing additional projects to bulk up your portfolio. If you’ve already spent some time researching coding bootcamps, you may have your own questions on the subject. We here at BootcampRankings have the breakdown on all things coding bootcamp related!

General Assembly and CareerFoundry are two of the top coding bootcamps for front end programming hopefuls.

General Assembly coding bootcamp is one of the few bootcamps out there that has a program specifically for front end web development. The classes take place in several locations across the globe and also online. They’re part time, two days a week, with the entire program lasting about two months. Tuition for General Assembly’s part time courses is significantly lower than competitors with the online front end development course costing just short of $4,000 USD.

While not as structured as coding bootcamps, these online resources are often cheap and provide great reference material to support your coding curriculum. Make sure to take note of these resources as they will serve you well throughout your coding journey. These are three of the best front end coding resources available.

Codecademy is one of the most popular online coding courses on the web. The site offers individual courses in 11 different programming languages or more inclusive courses by subject. Subjects include: web development, data science, and game development. Here’s the catch, when you sign up for Codecademy, you’re granted a 7 day free trial which unlocks all of the courses on the site. After this trial ends, you are only allowed access to the free courses since many courses are dedicated for “Pro” members only. If you’re looking to upgrade to Pro, memberships are anywhere from $20-$40 per month depending on your payment plan. Even if you don’t buy the Pro option, Codecademy might still be the right fit for you!

Udemy is an online educational learning platform that offers classes in several subjects. These classes are outsourced through different universities and companies. While many of these courses cost money, some of them are free and offer great educational value!

EdX is highly similar to Udemy in the fact that it outsources educational content. The site has many different subjects with hundreds of different courses to choose from. While you traditionally have to pay for content on edX, some courses offer an option to “audit” their class, which means that while you wouldn’t obtain certification or credit, you would be able to learn the material for free.

It’s important to note that these are only three of the many coding resources available online. It’s also important to look into other forms of media and resources including books on certain front end and back end concepts and in person workshops within your community or coding program.

In today’s era of user interaction, the success of a business lies in optimal customer relationship management (CRM) systems. A business is only successful if it builds a loyal customer base. Aspects like marketing, a good landing page, and user-friendly and ethical design are crucial elements of success, which will be open to you if you learn Infusionsoft.  Infusionsoft, by […]

Read More
How to Become a Python Developer: Essential Skills, Steps, and Salaries

Python is arguably one of the most popular programming languages, and Python developers are among the most sought-after tech professionals today. In this article, we offer an exhaustive guide on how you can become a Python developer. From the importance of the field to the courses and steps you’ll need to take to break into Python development, we explore all […]

Read More
How Much Do Coding Bootcamps Cost, and Are They Worth It?

Coding bootcamps have become the most popular alternative to traditional university degrees. If you’re thinking of attending a bootcamp, one of the first factors you should consider is tuition. How much do coding bootcamps cost? Is the coding bootcamp cost worth it in the long run? How much can you earn after graduating from a coding bootcamp?  In this guide, […]

Structured Query Language, popularly known as SQL, is a programming language that allows for data management and manipulation. It’s an essential skill for backend development, business intelligence, and database administration. Learning SQL, either on your own or with the help of SQL courses, can significantly improve your career prospects. To help you get ready to study SQL, we’ll first review […]