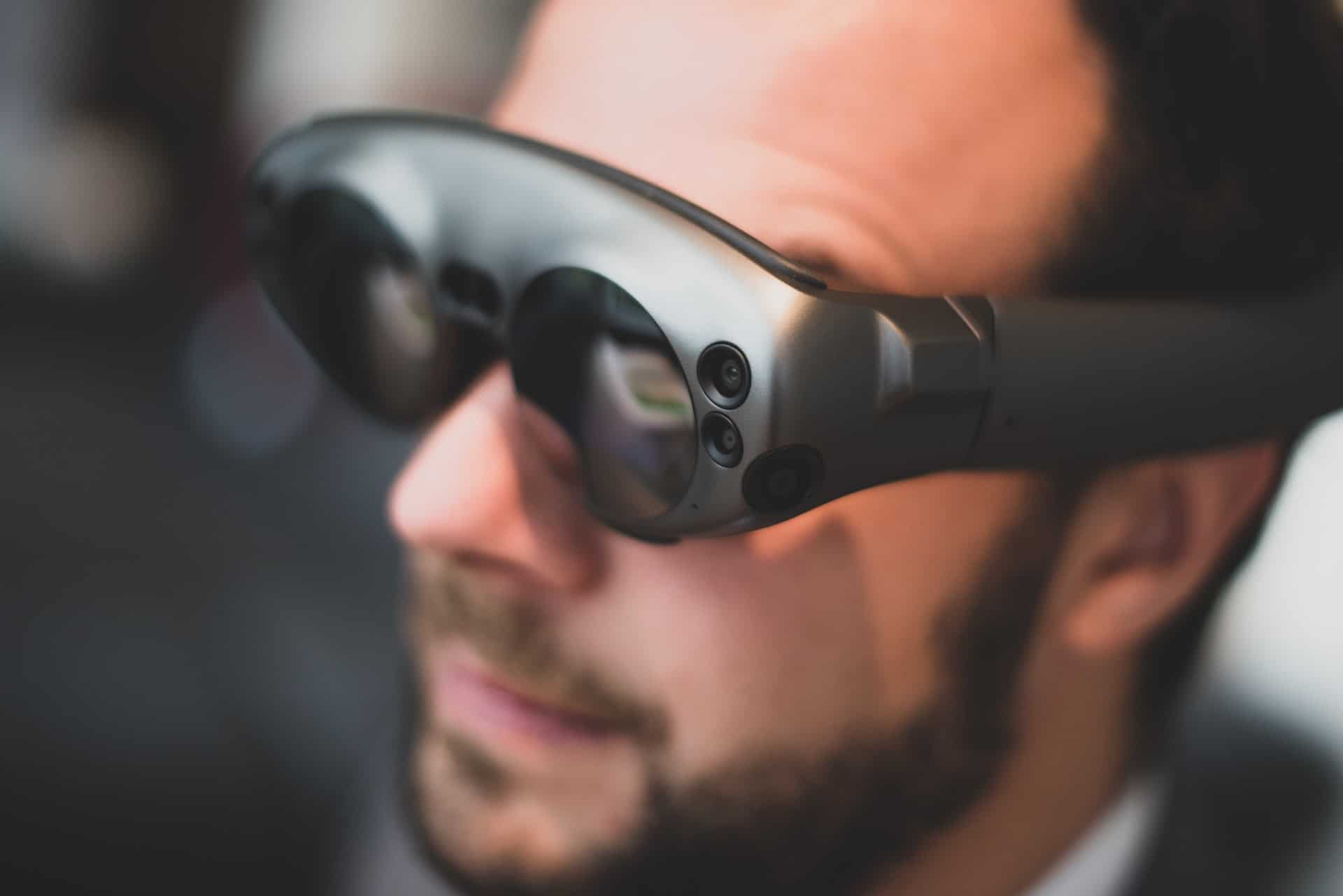 Learning augmented reality (AR) is no longer a matter of studying science fiction novels. Its successes, like Pokémon GO, and its failures, like the first iteration of Google Glass, have been well documented. The latest AR technologies are already revolutionizing education, healthcare, retail, and more. Society is ready for fresh talent to lead AR into the future.

If you’re interested in entering the AR space, this article will help you take the first steps towards making it happen. After defining the field and surveying viable career paths and education tracks, we’ll direct you toward the best augmented reality courses for learning the ropes, building practical skills, and creating your very own AR experiences.

What Is Augmented Reality?

Augmented reality (AR) is the technology of overlaying computer-generated images onto one’s visual experience of the physical world. By means of cameras in smartphones and tablets or a wearable device such as AR glasses, a user can experience the illusion that virtual objects inhabit the same plane of reality as objects in physical space.

AR is one of three types of extended reality (XR) that includes virtual reality (VR) and mixed reality (MR). In VR, the user is completely immersed in the virtual world. In AR and MR, the user’s experience of the real world remains primary. MR is basically a more dynamic version of AR, in which the user can manipulate digital objects more freely.

We can further divide augmented reality into two basic subcategories: marker-based and location-based AR. Marker-based AR, such as a QR code, anchors an AR experience to a specific object in the real world. Location-based AR, on the other hand, syncs geolocation data with the camera on a smart device to plant digital objects in the user’s field of vision.

6 of the Best Courses to Learn Augmented Reality

The speed at which augmented reality technology is advancing makes it hard for traditional forms of higher education to keep up. While it is certainly possible to get a bachelor’s degree in augmented reality, such programs tend to be both cost-prohibitive and time-consuming.

An online course, on the other hand, is much more likely to accommodate your specific goals and help you acquire the skills you need in a hurry. Whether you favor iOS or Android, Unity or Unreal Engine, ARKit or ARCore, the augmented reality courses below will put you on the fast track to developing the AR experiences of your dreams.

Six of the best online courses to learn augmented reality are offered through:

If you’re a devotee of Apple products, then you’ve probably heard that Tim Cook is leaning hard into augmented reality. To prepare yourself for the next wave of AR innovations, you would be wise to learn ARKit, Apple’s proprietary development tool for creating augmented reality apps.

The course is online and asynchronous. Perfect for working professionals, it allows you to tailor the course to your schedule. This two-month course dives deep into ARKit’s impressive functionality. It guides students through hands-on lessons on virtual objects, mapping physical space, and learning how to stitch them together, all on Apple devices. Prior experience with iOS programming is recommended, so you should lock down the basics of Swift and Xcode before enrolling.

A Beginner’s Guide to Augmented Reality with Unity

If you’re interested in mobile development but can’t decide whether to build AR apps for iOS or Android, then this is the course for you. Instructor Penny de Byl sets students up with all the equipment they need, including the Unity game engine and the Wikitude SDK, to start creating AR experiences for smartphones and tablets across multiple operating systems.

Like the UC San Diego Extension course, you are expected to be comfortable programming with C# going in. Fortunately, it’s not particularly hard to learn. Once you have it down, you’ll be ready to tackle Penny’s three awesome AR projects.

This course has garnered a 4.3 star average across 884 ratings, so you can rest assured that you won’t be wasting your time (or money). Students are granted full lifetime access to all course videos, resources, and articles, so you can use its resources even after course completion.

Introduction to Augmented Reality and ARCore

This leisurely-paced introduction provides all the conceptual underpinnings you need to start building realistic AR experiences with ARCore, Google’s augmented reality SDK. For the first two weeks, you will focus on developing a platform-neutral understanding of AR technology. In the last two weeks, you will learn the basics of Unity, Google Poly, and ARCore.

This online, asynchronous course allows flexible deadlines, making it the perfect option for the working professional. The ability to tailor deadlines to best suit your schedule minimized stress and allows you to focus on the material at hand. Because the emphasis of the course falls on the relationship between the theory of AR and the capabilities of Google-affiliated hardware and software, you can get by without knowing how to code. But you’ll want to learn eventually, especially if you leave this course feeling like the functionality of ARCore falls short of your aspirations.

This course has a 4.5 star rating (with 2,721 ratings), so you can be confident that Coursera’s course will deliver the best quality in AR education. What’s more, 19% of students landed a new career upon completion of this course, and 10% scored a pay increase or promotion.

Unity and Vuforia: Trying on Watches in Augmented Reality

Some online courses overpromise and end up losing clarity and focus by trying to pack in too much content. This isn’t one of them. The title tells you everything you need to know about what you will learn, and the course delivers on its promise. After two modules on the basics of Unity and the Vuforia augmented reality SDK, instructor Parth Anand walks through a 12-step process for creating a shopping app that allows end-users to try on AR watches. You’ll learn to work with 3D models and create buttons and components for your app interface.

Completion of this program will result in a certificate of completion to showcase on your LinkedIn profile or otherwise share online. If you like the simplicity and elegance of Anand’s teaching style, check out his YouTube channel, which is devoted to all things AR.

Conducted in a similar style to the above LinkedIn course, this Skillshare introduction to augmented reality is even more beginner-friendly. Instructor Steven Christian is an artist and an excellent communicator. These two skills are evident as he instructs students on how to use Unity and Vuforia to bring an artistic vision to life in AR. Skillshare’s AR course is the perfect fit for students at all experience levels. The best part? No prior coding experience is required.

This course allows unlimited access to course materials, so it will serve as a valuable resource even after completion. What’s more, Skillshare grants its students access to a supportive online community.

Getting Started with Unreal Engine 4

Proponents of augmented reality tend to focus on its educational or enterprise applications, but many developers in the AR/VR space are just in it for the games. And that’s okay. If you want to learn how to create immersive games with awesome graphics, learning Unreal Engine is the best place to start. This popular game development platform was created by Epic Games, the makers of Fortnite.

This course is self-paced, so you can work on your own time and set your own schedule. Although this is an introductory-level course, some prior experience with programming concepts and 3D design is recommended. This course is one part of a 3-part certificate series. If you like this course, you should pursue the next course in the series, which covers interactive 3D development.

One downside of this course is that it’s pretty broad, covering extended reality in general rather than focusing on augmented reality in particular. But you’ll still get a peek into the geometry, physics, and lighting behind planting realistic virtual objects in the real world.

Four Jobs that Use AR Skills and Technologies

Once you have the skills and portfolio to demonstrate proficiency in AR, you won’t have to limit your job search to a single industry. Enterprises of all kinds are looking for ways to incorporate augmented reality and mixed reality into their business practices and consumer products.

That said, here are four of the top job titles in the world of AR:

Thanks to the wealth of resources available to aspiring developers, learning how to augment reality is relatively easy. You won’t have to reinvent the wheel, but if you’re serious about becoming proficient, here are four steps you should follow.

1. Explore the Fundamentals of AR Technology

The first step is to demystify the magic of augmented reality by learning what makes it work. This means understanding how technologies like spatial computing, geolocation, CGI, image recognition, and simultaneous location and mapping (SLAM) have brought the physical and virtual worlds together, all while continuing to reduce the size of the uncanny valley.

2. Learn How to Code

Although it’s technically possible to develop AR apps without being fluent in a particular programming language, you won’t get very far without coding skills. Consider starting with the C family of languages, especially C#, and be sure to learn Swift if you have designs on working with Apple and iOS.

Luckily, the AR/VR world is chock-full of tools for development. For the animation part of it, you’ll want to choose a game engine like Unreal Engine or Unity, with the latter being the most popular for AR projects. For integrating the physical and the virtual, you’ll need an AR software development kit (SDK), such as Vuforia, Wikitude, or ARKit.

Last but not least, begin playing. A great way to generate ideas for AR apps is through online courses, most of which give students hands-on experience with a particular game engine and SDK through one or more starter projects. Browse the courses below to find the spark that will ignite your creativity.

Perhaps the best reason to learn augmented reality is that you don’t have to climb too steep a hill to acquire the requisite skills for a potentially lucrative career. According to Payscale, someone with training in AR is employable to the tune of $82,000 per year. That figure alone would be sufficient motivation for most people.

Besides the chance for a big payday, you’ll also be putting yourself in a position to work at the cutting edge of spatial computing and artificial intelligence, two fields that are contributing to the advancement of society in untold ways. With that in mind, only one question remains. What are you waiting for?