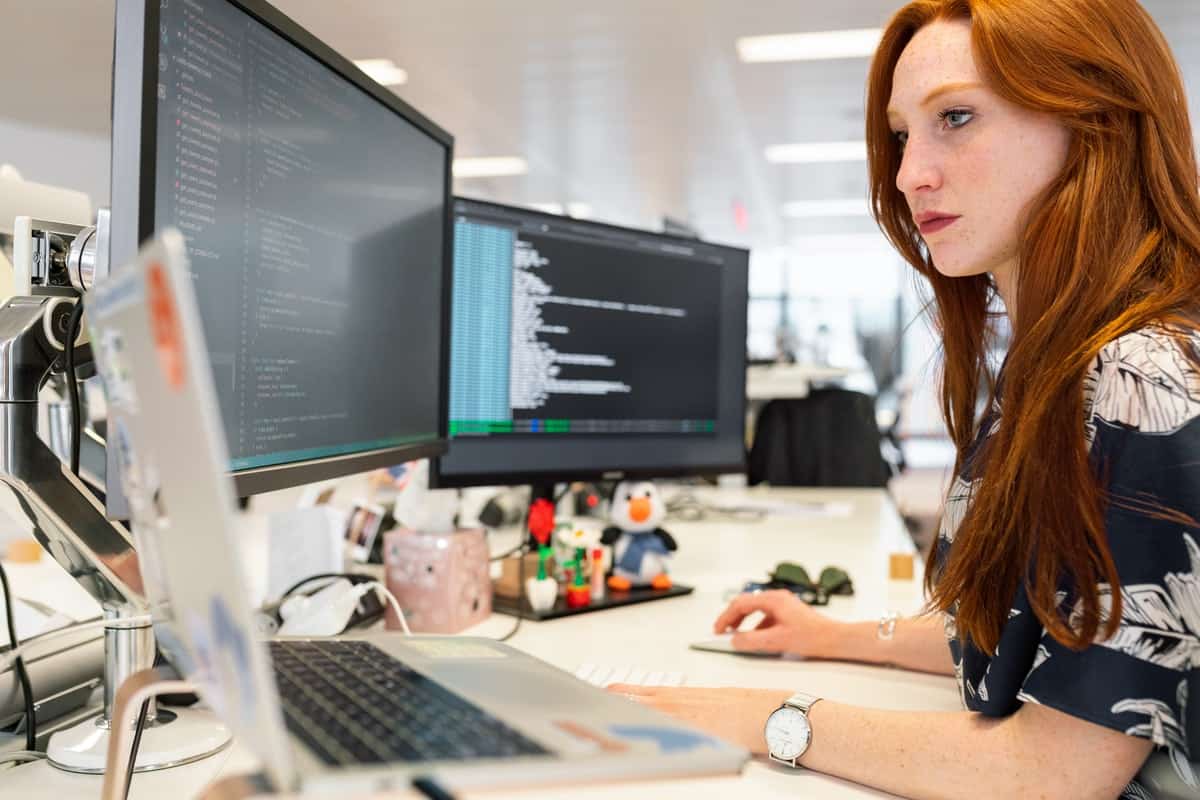 Computer Science vs Computer Engineering: What’s the Right Field For Me?

If you’re unsure about which career path might be for you, take a look at this guide. We’ll show you the main differences between computer science and computer engineering and the potential career opportunities in each field.

This means that computer engineers can work in the areas of robotics, aerospace, and cyber security, while computer science students can focus on areas like software engineering, database management, and operating systems.

What Is Computer Science?

Computer science is the study of computational theory, including both hardware and software, but with a primary focus on digital products. Computer science covers topics like data structures, functions, algorithms, data modeling, and network engineering.

What Is Computer Engineering?

The role of a computer engineer is also to monitor the manufacturing process by testing the products to evaluate their performance. As necessary, they update current computing tools to match them up with up-to-date software. That’s why they work closely with developers throughout the entire development process.

Computer engineering doesn’t only deal with computer products. The field also covers all forms of modern technology driven by the Internet of things (IoT), such as home supplies or any component that needs to be connected to the Internet. There are degree programs for computer engineering, but bootcamps do not typically cover this topic.

Computer engineers and computer scientists both work with computer components, hardware, and software architecture. In both disciplines, you need to use logical thinking and math skills.

In the job market, the two professions often collaborate, working together on computer solutions and other practical applications. Both of these careers can be achieved through a college or university degree program.

Computer scientists and computer engineers usually work closely to develop digital products that offer a smooth user experience. However, they focus on different aspects of development and have different responsibilities during the development process. Below, we will talk about these differences in greater detail.

What Does a Computer Scientist Do?

A computer scientist usually works at the software level of production. A computer scientist conducts research and tests based on his or her understanding of the theory of computation, designing solutions for software and websites. They create innovative products to solve problems and automate tasks.

A computer scientist must work with the front end and backend processes of software and web development. It’s also their job to troubleshoot any issues with the product and maintain it with upgrades.

What Does a Computer Engineer Do?

A computer engineer’s role is to design, develop, and install hardware products and components such as memory cards, electrical circuits, or batteries. They must also work with software engineers to make sure the software runs smoothly with the hardware and that the interface functions well with the physical parts of the product.

Another computer engineering responsibility is to design and set up networks. Computer engineers must test them to avoid any potential issues with the system.

Computer scientists have a wide range of careers to choose from. Computer science is a pretty extensive field that includes software development, database administration, and even artificial intelligence. Below is a list of computer science positions you could pursue.

Computer engineers can perform most of the manufacturing processes for IT products and components. That’s why jobs like hardware engineer or hardware designer suit them most. If you prefer to work independently, you can also become an IT consultant with a Master’s Degree in Computer Engineering.

Look at the following list to know some of the job opportunities in the computer engineering field.

These two fields cover most of the career options in the computer technology industry, and either field can lead to a lucrative career. According to PayScale, a four-year computer science degree is worth an average annual salary of about $87,000, and the same type of computer engineering degree is good for around $89,000.

Both computer science graduates and computer engineering graduates earn significantly more than the average professional working in the United States. According to the Bureau of Labor Statistics, the national average salary is $41,950.

What Is the Difference Between a Computer Science and a Computer Engineering Degree?

A college computer engineering program will teach you how to take the theory of computing and build a practical application. Computer engineering majors learn about hardware prototyping, designing, and testing. You will focus on the manufacturing process and learn how to build microchips, laptops, smartphones, and intelligent machines.

All legitimate computer science degree programs have ABET-accredited curricula, which means they all offer essentially the same courses. It doesn’t matter how much programming experience you have. You will start with the fundamental principles and work your way up to more complex topics. Below are some sample course titles.

Computer engineering programs in the United States are also accredited by ABET. The core curriculum is designed to give students a basic foundation in physics, chemistry, math, and other core electrical and computer engineering topics. Let’s take a look at a few examples.

If you’re interested in advancing your career in any of these fields, you can do it. There are many specializations you can follow in either computer science or computer engineering. Below you will see both types of specializations in depth.

Computer science programs give you several specializations to choose from. You can become a web developer, software engineer, game designer, or cyber security engineer. Below we have listed some CS concentrations that most university programs offer.

What Skills Will I Learn?

Whether you study computer science or computer engineering, you will learn about software and hardware fundamentals and hone your problem-solving skills. While there is some overlap, the two fields require different skillsets overall. Take a look at the following list to learn about the skills you’ll need to be successful in each field.

One of the most relevant computer science skills is software development. You will learn about the most popular programming languages for front end and backend development, such as HTML, CSS, and Python. You’ll also learn software design, which is the process of creating the structure of a software product and its appearance.

As a computer scientist, you should be proficient at managing databases. This includes subskills like data security, accessibility control, and database organization. If you focus on honing these skills, you can become a database administrator.

Data analytics is a skill that involves collecting data, scraping it, and analyzing it to find relevant insights. Data analytics is used in most industries for research purposes. It’s used for identifying trends and anomalies, as well as for forecasting events.

Computer architecture refers to the construction and organization of computer systems. This also involves the functionality and implementation of computer components, especially when it comes to hardware.

Hardware testing is the process of evaluating the performance of computer components. It is particularly used in mobile and computer manufacturing. Computer engineers must be able to troubleshoot any issue they find.

Nanotechnology design is another relevant skill you will acquire as a computer engineer. It consists of creating nanodevices such as microchips. This has become even more relevant with the rising popularity of microdevices.

How to Decide Which Master’s Degree Is Right for You

Both of these career paths are very lucrative and rewarding, but if you really want to maximize your earning potential, you should go to graduate school for computer science or computer engineering. To help you choose which of these master’s degrees to pursue, let’s examine the two most relevant factors.

Salary may be a decisive factor when it comes to choosing a master’s degree. According to PayScale, those with a Master’s in Computer Science earn about $104,000 per year, while a Master’s in Computer Engineering can get you $102,000. The difference is small, but computer science is the slightly more lucrative field for advanced students.

Even though computer science and engineering have several similarities, they focus on different areas, so you should keep that in mind when choosing a specialization. Are you more interested in software engineering or hardware manufacturing? This is a key factor to consider before diving into one field over the other.

Which Degree Should I Pursue?

You should choose a degree that matches your aspirations and the subjects you enjoy the most. Both computer science and computer engineering are very challenging, so you should be prepared to spend a lot of time studying and preparing. You’ll have to work under pressure much of the time.

If you feel happier writing code and designing digital solutions, computer science would be a great match. However, if you enjoy designing prototypes and constructing components, you should start researching the best computer engineering schools.

Behind every well-presented and structured Google page lies the magic of HTML. Hypertext Markup Language, or HTML for short, is used for the overall text and page presentation. The language is so prevalent that you couldn’t create a sophisticated website like YouTube, Facebook, Google, or any website for that matter, without learning HTML.  HTML is mandatory for building websites, as […]

When looking for the right tech bootcamp, most people want more than learning a certain tech skill set. They also seek proper job assistance that can help them break into the industry and thrive in their careers. And this is one of Ironhack’s top priorities.  Ironhack is an international coding bootcamp known for offering customer-centric and outcomes-driven tech education. The […]

If you are thinking about starting a new high-paying career in tech, then you’ll need a technical education to reskill for the tech industry. A degree can be expensive, so many students look for cheaper options. Coding bootcamps are technical training programs that prepare students for careers in tech. They are less expensive than most degrees and only take three […]

If you’re considering becoming a web designer, it’s crucial to learn how to create effective websites. But where do you begin? We suggest you start by learning CSS. Used concurrently with HTML, this basic programming language is a building block of countless web pages, and thus one of the best languages to learn. Web development and design are some of […]