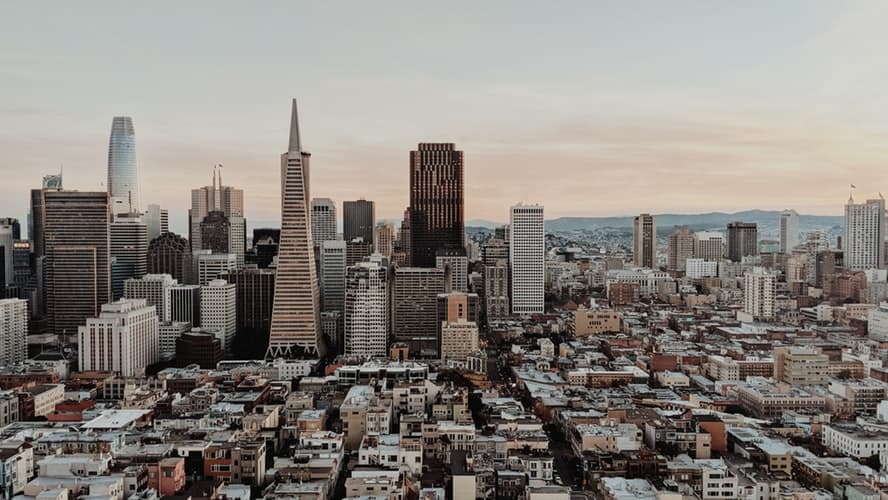 Hailed as one of the most prosperous tech cities in the world, San Francisco is the beating heart of the American tech industry. The city and surrounding areas make up the famous Silicon Valley tech hub of the west. With so many businesses in the region, how do we even begin to decipher which tech companies are the best? Better yet, what defines a good company in the first place?

The Breakdown of Silicon Valley

Silicon Valley has seen an increase in over 1.1 million tech jobs since 2010, with an overall job growth rate of 5%. The average salary for a tech worker in Silicon Valley is $145,000 per year, which is up 2% from 2018. To give some perspective, the average median salary across all industries in the US as of 2019 is around $56,000. It’s obvious that tech isn’t just a profitable field, but tech jobs in San Francisco prove to be especially valuable.

It is important to note that due to the influx of workers, the Silicon Valley area has the highest cost of living in the United States. The median listing price for a home in San Francisco is around $1.3 million.

Now that we’ve gotten a proper background on the bustling Silicon Valley tech scene, let’s take a look at which companies make the top of the list. In order to be a bit more organized, let’s break this down into a couple of categories: major corporations and startups. Let’s breakdown the top companies in San Francisco!

As one of the most successful companies on the planet, it should come as no surprise that the tech giant Apple sits at the top of this list. Located in Cupertino, the company currently has a market cap of over $1,206 billion. The tech hardware and software company has had many successful projects over the years. Its most well known is most likely the iPhone. In 2019, the company also branched into the world of video streaming with a variety of its own content on the streaming platform Apple+. The company also broke into the financial sector during 2019, with the introduction of the Apple Card.

This company seems to rank near or at the top of the list for almost every tech city in the world, and for a good reason! Google (owned by parent company Alphabet), is the world’s largest internet search engine. The company has transformed from a mere search bar on a computer to one of the most powerful ad and marketing companies in the world. The company currently has a market cap of over $867 billion. Google is also hailed as one of the best places to work in the world, with a variety of major perks and high salaries available for employees.

Facebook is arguably the world’s most successful social media company. Located in San Mateo County, the company’s headquarters are centered in the heart of Silicon Valley. Founded in 2004 as a college networking app, the company has since grown to a market cap of $561 billion. The company surpassed 1 billion users in 2012, making it the first social media platform to achieve such a feat. Today, there are over 2.4 billion users on the platform. That’s nearly one-third of the entire planet’s population.

By far the oldest company on this list and even one of the oldest in California, Wells Fargo was founded in 1852 (only 2 years after California became a state). Headquartered in San Francisco, the company has a market cap of $229.9 billion, which is the highest out of all U.S banks. This number may come as a shock given that Wells Fargo is only the fourth largest bank in the U.S in terms of assets. While technically a finance company, Wells Fargo established itself as a major player in the tech industry and has been at the forefront of the FinTech (finance and technology) industry.

Yet another major social media company finds itself amongst the most successful companies in the world. Founded in 2006, Twitter is currently headquartered in San Francisco. The social media site currently has around 330 million users, and is especially popular amongst younger generations and celebrities. The company has a current market cap of $25 billion.

The popular food delivery platform is taking cities across the United States by storm. The company effectively doubled its employee count each year since its inception. DoorDash shows no signs of strain due to increasing competition in the food delivery industry.

Located in Menlo Park, Robinhood is one of the biggest FinTech startups in the Silicon Valley area. The company’s platform lets users buy and sell stocks and exchange-traded funds all through the ease of a mobile app. The company currently has a valuation of $7.6 billion. The company also hosts one of the most popular financial podcasts of 2019 (Robinhood’s Snacks Daily).

Hailed as one of the most successful startups of 2019, Snowflake is a company that works to move data to the cloud in the most efficient way possible. The company grew its revenue by 257% and doubled its valuation to $3.9 billion in just one year. The company is currently looking to staff up as they expect additional growth in 2020.

Headquartered in San Francisco, this company spent the past two years in a period of tremendous growth. Lime offers app-accessible dockless bikes and scooters in over 100 U.S. cities. The company also has an international presence in several cities across the globe.

Located in Palo Alto, Rubrik specializes in cloud data management. Founded by former Oracle, Facebook, and Google engineers, the company works hard to establish itself as a major industry player since its inception in 2014. The company is continuing to scout for talent as they prepare for 2020, which is projected to be its biggest year yet.

The San Francisco Bay Area is one of the most influential technology centers in the world. With the biggest players in the industry calling Silicon Valley home, the city continues to stand the test of time and grow its wealth and influence. The city now acts as an incubator for some of the world’s most promising startups. With major companies and startups living so close together, innovation is happening across the board, with acquisitions taking place almost daily.

What we do know about the continued acquisitions of startups in Silicon Valley is that the economy in the area is worth more than ever before. With investors itching to make a buck and young industry hopefuls working tirelessly to launch its products, San Francisco is a promising environment for both investors and entrepreneurs alike.

While time will tell if current trends are the best thing for the industry, what we do know is that with the continued demand for jobs in the Silicon Valley area, perks and payouts for employees will only continue to rise. What does this mean for you? Well, if you have your sights set on Silicon Valley, it’s important to diversify your skills. Even if you have your heart set on a single dream company, don’t discount startups right away. While some can be riskier than others, the potential rewards of upward movement are sometimes worth the initial risk.

Attending a coding bootcamp can be difficult. Most programs require a full time, in-person commitment, and if you don’t happen to live in a tech capital where most bootcamps take place, many courses will be unavailable to you. However, some bootcamps provide online learning solutions, and Codeworks makes an effort to make an online program that matches the quality found […]

Read More
How Time Tracking Will Boost Your Productivity

If you ever worked on a project, you would know for a fact that getting the project done is just as important as evaluating the effort you put in the whole process. Knowing how to do things right is an important skill in business because you want your work to be profitable. Since nothing is created outside of time, time […]

Austin, also known as “Silicon Hills” is the state capital of Texas. Austin earned the nickname “Silicon Hills” due to the presence of high-tech industries situated in the metropolitan area. “Hills” refers to the hilly terrain along the west of Austin. The city is known for its live music centered around country, blues and rock and is known as the […]

If you’re lucky, you’ve been allowed or even encouraged to work from home during the pandemic. While working from home has its perks, it can make balancing your work-life balance tougher than ever. For better or for worse, remote work may be here to stay for many workers, so it’s time to find a way to make the most of […]